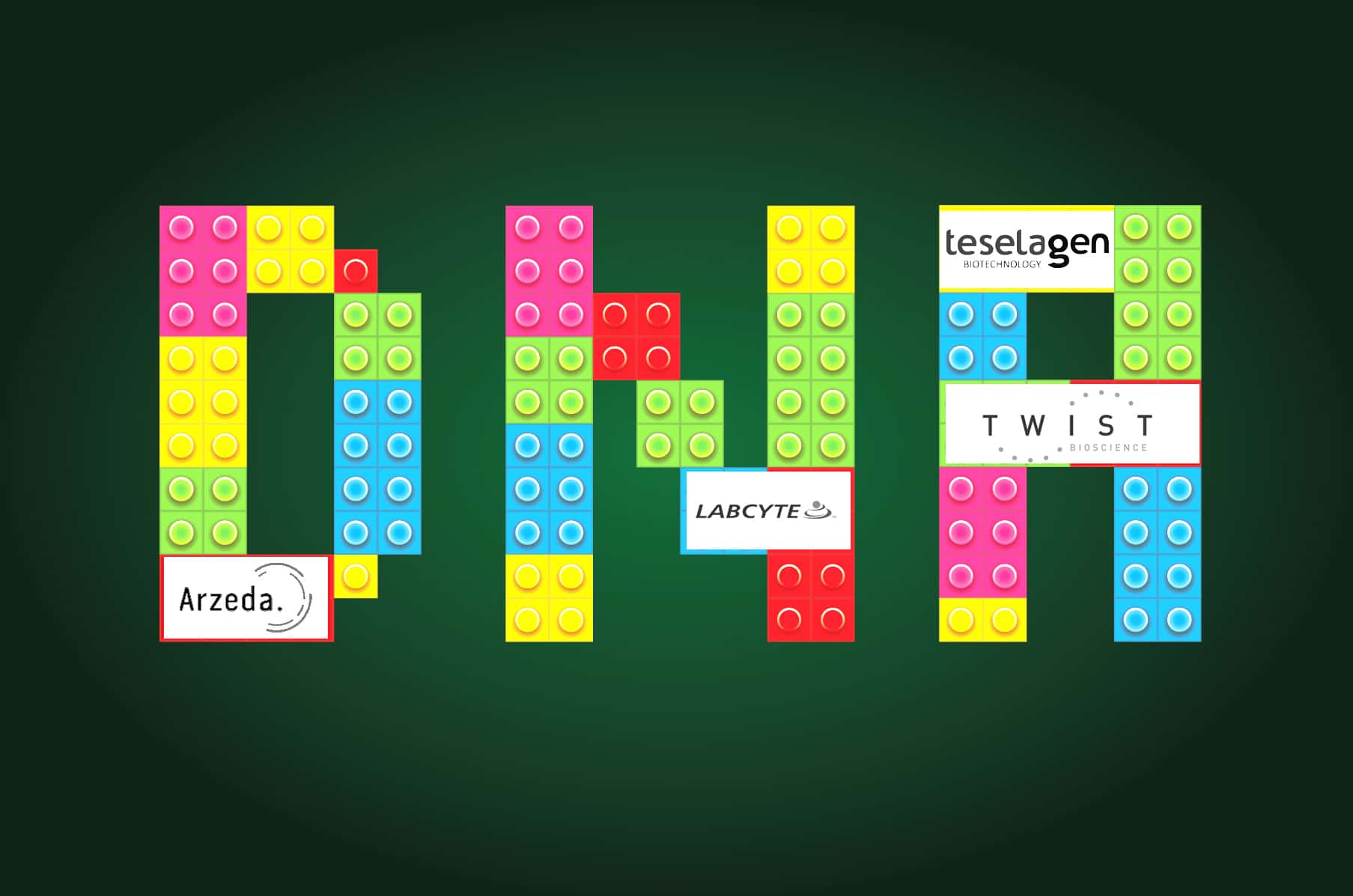 The human body is an incredible machine. It is impossible to determine which is the essential body part for sustaining life -- because there is no single indispensable part. If your heart stops beating, you will die. If your lungs stop working, your brain -- and thus all of your cells -- will eventually die. Without a stomach or intestines you cannot acquire nutrients and you will die. All parts are critical for optimal function, for sustaining life.Synthetic biology as a field is no different. There are those that supply DNA -- arguably the critical building block for every single synthetic biology application. There are those that automate and scale components of the design-build-test cycle to enable innovation to effect change in meaningful timelines. But when all of those parts come together with a single goal, the power of synthetic biology reaches new levels.Such potential is exactly what Arzeda -- through a collaboration with TeselaGen, Twist Bioscience, and Labcyte -- has brought to us. Each company, a giant in its own right, provides an essential, needed component to an elegant, efficient workflow that can best be described as a “DNA assembly line” for more rapid, efficient protein design and production. The companies’ products work seamlessly: Twist produces the DNA fragments needed to make protein-expressing plasmids, Labcyte’s acoustic liquid handler (the Echo 525) facilitates rapid DNA assembly, and TeselaGen’s DNA assembly design and laboratory automation software connects the two, designing plasmids and ordering the necessary sequences from Twist while generating worklists for the Echo to execute.“The way I describe it is like Legos,” says Justin Bramwell, Director of Sales of North America - West at Labcyte. “You have TeselaGen’s software -- your manual and instructions of where everything goes, you have Twist providing high quality pieces, and you have machine that's basically a robot assembling from instructions as fast as possible.”Put that in the hands of someone like George McArthur, Director of Genetic Design-Build at Arzeda, and protein design reaches the next level. And that’s nothing but good news for patients, materials producers, or biopharma companies alike.

A collaboration of giants

According to Bramwell, the collaboration began as most fruitful collaborations do -- with an innovative customer. In this case, the customer was Arzeda, the Seattle-based protein design company that develops novel proteins for a range of applications from food ingredients to biopharmaceuticals. Testing countless proteins each year, which are expressed in plasmids, the company needed a much faster way to produce their plasmids (and ultimately, useful proteins for customers). Not only did the company seek to find a solution to their own throughput challenges, they wanted to provide something useful for the entire community.“The impetus behind the collaboration was … I wanted to do this in such a way that helps everyone, and I wanted to become an industry standard -- meaning that if a new startup comes out next year, I want them to say, ‘Oh, we know how to do DNA assembly, it's tried and true, it's proven, we don’t have to reinvent the wheel,’” says McArthur.A little over a year and a half ago, Arzeda’s assembly line was nearly complete. With TeselaGen’s design software and Twist’s high quality DNA fragments, there was only one piece missing: a fast, efficient, error free solution for assembling their plasmids. They found their solution in the Labcyte Echo acoustic liquid handler.

Image source: Twist Bioscience“Once George and his team got their hands on the instrument it was just a matter of weeks to validate the value of the product,” says Bramwell, adding that “in just a few months everything was mapped onto Arzeda’s production pipeline.”The Echo provides significant time and money savings due to its ability to miniaturize reactions and perform them in parallel. To do the type of work Arzeda (and other biotech companies) wants to do at the scale and throughput they want to do would be impossible if left only to human hands.“A lot of people focus very heavily on the software and the DNA parts, and the liquid handling aspect -- it’s expected that it will somehow just magically happen. The Echo makes that a trivial task where it literally would be impossible . We have entire companies that when they start, whether it's foods, fragrances, or building compounds, the first thing they buy is an Echo because they know it’s a necessary piece of equipment build their company around their platform,” says Bramwell.It’s not an inexpensive piece of equipment, he admits -- even McArthur initially thought the Echo was going to be out of reach because of the cost -- but in the long run it saves thousands to hundreds of thousands of dollars (not to mention hundreds of person-hours) over time.McArthur and his team recently showcased their DNA assembly line during a live demo event at Arzeda drawing about 100 audience members from academia, small start ups, and large corporations alike. Motivated to reveal to the synthetic biology community something that they had not only created for their company, but that they had created for everyone, they demonstrated to audience members how quick and easy it was to begin assembling DNA using the system they had built with the help of Labcyte, TeselaGen, and Twist.

Image source: Twist BioscienceMcArthur remembers the audience’s jaw-drop moment when he revealed that it only took Arzeda less than two weeks to implement their workflow on the Echo. Bramwell emphasizes the significance of this moment:“A community of people was able to come in and play with the technology and software, and see how it actually works, then walk over to the Echo and see it in real time actually dispensing ... and see that it only took five minutes to get set up and running,” says Bramwell. “It was really just driving home the message that this is not some vaporware thing that we're promoting …. You can stop what you're doing with your conventional process, and you can implement this tomorrow.”

But perhaps the most exciting result isn’t contained to the walls of the convention center at which the DNA assembly line demo was held. Bramwell sees even greater significance for the synthetic biology community.“It’s showing the community that there’s a better way to do this, and that it’s not necessarily an arduous task …. The real power of this is demonstrating that you can work with these vendors and you can buy stuff ready to go, and in a very quick time frame build a pipeline that is very efficient and very scalable.”“ is open, it’s shareable, other people can contribute to it and everyone can benefit from it,” adds McArthur.“We are seeing a convergence of technologies and a readiness of the larger markets to embrace the growing benefits of synbio,” adds Emily Leproust, Ph.D., CEO and co-founder of Twist Bioscience. “Integration of different technologies into a singular workflow truly accelerates science and spurs new and exciting research.”When it comes to Labcyte, Bramwell sees the recent acquisition of the company by global life sciences leader Beckman Coulter the linchpin for providing solutions like the Lego kit Arzeda built to other customers. For Arzeda, the Echo is a stand alone machine, but Labcyte provides an entire automation suite to support the level of scaling companies need to get done. That, on top of the other product and capability offerings provided by Beckman Coulter puts Labcyte in a position to provide an entire liquid handling and automation suite for customers.

Image source: Twist Bioscience“Customers will start to see the value of the Echo, but they're going the Echo is the engine inside the workflow that they need, and they’ll come to Labcyte and say ‘I need a solution around do this end to end the assembly and QC process,’” predicts Bramwell. And, he also predicts, they’re going to be able to deliver.Each customer will be different, he emphasizes: not all are likely to be as direct as Arzeda in terms of what is needed to make the process work. But, like Arzeda, he expects customers will come in with part of their workflow process established, providing Labcyte the opportunity to give them another tool to finalize their end-to-end workflow. And Labcyte continues to build their acoustic liquid handling capabilities to be able to provide the customer with more options, further eliminating the need for the customer to work with 10 different vendors to build a complete pipeline.Bramwell points to SCIEX, a producer of mass spectrometry instruments, as an example. Labcyte will be working with the company to turn their mass spectrometers into automated machines capable of handling very large numbers of samples in a cost-effective way.“It really starts to change the game, not pushing all of that work onto the customer to go out and ... find these things. It definitely makes that barrier to entry much, much lower,” says Bramwell.I am as excited as he to see where the foundation laid by Labcyte, Arzeda, TeselaGen, and Twist will lead.Labcyte is a platinum sponsor of SynBioBeta 2019 and will be leading a workshop at the conference this year. Sign up today to secure your spot to learn from leaders from Labcyte, Twist, Arzeda, and many more thought leaders, entrepreneurs, and investors all seeking to use synthetic biology to make our world a better place.All trademarks are properties of their respective owners