The future of DNA synthesis 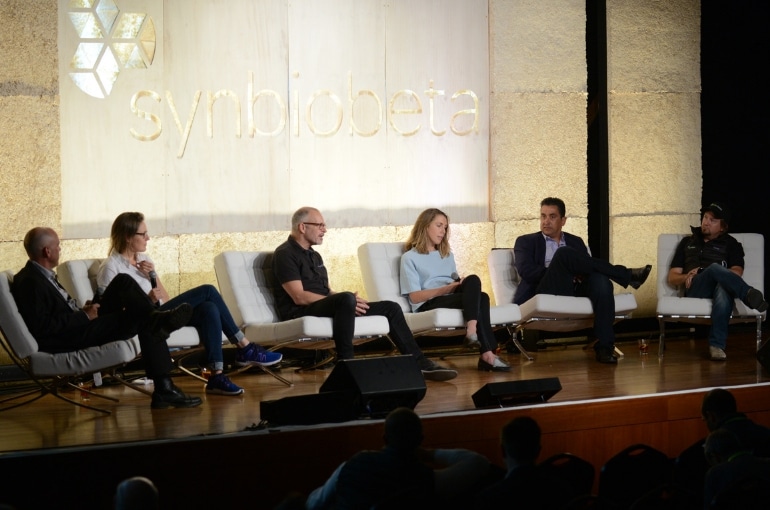 The future of DNA synthesis

DNA is the blueprint of life, as well as the cornerstone of the synthetic biology industry -- the core of the design-build-test cycle that makes custom organisms and the things they produce. So it’s fitting that SynBioBeta 2018 culminated in a final panel discussion about the future of DNA synthesis -- what many would call the future of synthetic biology.SynBioBeta CEO John Cumbers led a panel of five industry experts to discuss the future of DNA synthesis from an applications, market, and ethical viewpoint, in a session sponsored by Molecular Assemblies. The session was engaging and entertaining, and left at least one audience member (yours truly) with much to think about.

The demand for DNA synthesis is growing

SynBioBeta 2018 was accompanied by three major announcements in DNA synthesis: the acquisition of IDT by Danaher Corporation, the acquisition of Genewiz by Brooks Automation, and Twist Bioscience’s IPO filing. Cumbers came out swinging, asking simply: “What’s cooking?”Most panelists agreed that what’s cooking is a sign of a positive trend. Michael Kamdar, CEO of Molecular Assemblies, pointed out that consolidation is normal in growing industries -- so the slew of acquisitions were, to him, all positive for the field. Sarah Milsom of UK company Touchlight Genetics agreed, adding that the growing interest in synthetic biology is not limited to the US, referencing the healthy interest in nucleic acids in the UK. But Rob Carlson, Managing Director of Bioeconomy Capital, played devil’s advocate, reminding audience members that while acquisitions may indeed be a sign of great things happening, they could also simply be a sign that it’s difficult for companies in the industry to stay independent.

DNA data storage: How far away are we really?

The conversation quickly turned to one of the hottest topics in synthetic biology today: DNA data storage, which several companies, including Microsoft, are hotly pursuing.“I’m convinced this is a big deal and will create demand for synthetic DNA many orders of magnitude higher than current demand,” said Carlson. “I have a sneaking suspicion that … our storage technologies, our computational technologies, are gonna really look more like the way information processing and storage does in a cell today, than the way we do it with our phones.” Expanding on this idea, he offered what would prove to be an especially controversial idea later in the session: at the volume of DNA required to make DNA data storage work in the long term, the cost of long-read DNA sequences will basically drop to zero.But how close are we really to the future of data storage in DNA? Andrew Hessel, CEO of Humane Genomics, posited that while it is really early, we may not be as far off as we think.“Think about the amount of DNA written in your body as we sit here,” he said, which is much more than the 20,000 human genomes worth of DNA Kamdar says a DNA data storage box will need to read and write each day to keep up with the tape drive. We will get finer and finer control over these biological processes, Hessel said, which “will be a massive accelerant in just about every area of computation, data storage, and programming” -- leading to exponential growth in all of these areas.To Hessel’s point, Carlson offered a prime example: Microsoft’s prototype data center that will run fully off of DNA. The project has a deadline of only two years -- much less than the ten-year window Kamdar initially saw as realistic when he started with Molecular Assemblies. Kamdar says that government and industry have accelerated the technology “like gangbusters” in the last two years -- and it looks as if the trend will only continue. “The opportunity in this space is an order of magnitude higher than synthetic biology by itself,” he said, referencing the healthy funding landscape.

Is the future of DNA synthesis the desktop synthesizer?

Cumbers then offered an analogy to computers, comparing Twist Bioscience’s synthesizers to mainframe computers and Synthetic Genomics tabletop synthesizers to desktops. Cumbers asked the panelists where they thought the trend is going in the DNA synthesis space.Leslie Mitchell of NYU Langone Medical Center said that she felt benchtop DNA synthesis could be transformational and is an “awesome solution” to “democratizing the ability to have synthetic DNA in the short term.” But, she added, companies that are interested in sequence-perfect DNA for building genomes and commercializing them are likely to be much more interested in having someone else do the work for them.Milsom offered a different point of view, however. She said that when Touchlight developed a benchtop synthesizer to examine their process and modify their parameters, the machine piqued the interest of many groups working on hot commercial applications like personalized nucleic acid therapies.Carlson’s view was that the market will tell us the answer in time. “At the moment people are happy FedEx ordering DNA, and at some point it’ll switch over and they’ll demand faster service. But of course that only works when there’s a technology that can provide that on the bench.” He predicts that as enzymatic techniques replace the messy chemistry and other pitfalls, the demand for benchtop synthesizers will rise -- we just need to wait and see how long that takes.Hessel, however, feels that the technology itself will naturally evolve into benchtop -- and smaller -- synthesizers. “I would be really surprised if in 20 years we’re not sitting here and you’ve got a device in your hands or in your pocket that can write large genomes almost instantaneously,” he said. Referencing an earlier session on semisynbio -- the intersection of synthetic biology and semiconductors -- Hessel said he believes that eventually synthesizers, sequencers, and other machines will all be chip-based -- a natural evolution considering biology already works at the nanoscale.

As the floor was opened to questions from the audience, the discussion quickly returned to Carlson’s earlier statement about free DNA. Clarifying his point, Carlson explained that for DNA data storage to be economically viable, the DNA has to cost you nothing. And, he said, the cost will be driven down to basically zero simply because of the scale of the operation.But Kamdar didn’t agree. “What we would argue is there’s no reason to build a business if we’re just gonna give away everything.” If the DNA makes a difference, then people will be willing to pay for it, just like they pay for anything else in the world, he argued.But Hessel pointed out that the cost of reading DNA has gone from USD $3 billion for reading the first human genome over a decade ago to around USD $1000 for an annotated, medical grade genome. He explained that right now, reading DNA is essentially free because companies are realizing that you can get a lot more data out of a genome than the cost of acquiring that genome, which essentially becomes a customer acquisition charge. He envisions the same pattern for writing in DNA. And, while Kamdar continued to disagree (“nothing is free,” he emphasized), Hessel pointed out that we simply “build economics that make the commodity stuff near free, and then we build on top of that,” building an entire business model around the free information.Throwing a curveball into the discussion, Mitchell asked “How much does a nucleotide cost? Is that really going to be the rock bottom on this?”“Could be,” mused Carlson.

With that, the panel moved to a compelling audience question about what biosecurity frameworks we should be developing to protect ourselves against something created either in the lab or by “DIY Bio-ers in basements.” After a bit of silence, Hessel spoke up.“I think about this a lot,” he said, continuing that no agencies in existence today are up to the task. He believes that next-gen biosecurity monitoring will be focused on the digital world because “by time it gets to biology, it’s a little too late.”Carlson was emphatic that constraining access is not the way to go. It’s what the DEA did with methamphetamine,, which moved all production outside of the US and created a bigger, blacker market, he said. From his experience in D.C., he sees that enforcement is moving away from the brute force, crackdown mentality and toward careful monitoring. Leaders there are ceding that “our only tool is information, [and] we can’t ban anything because we have to know what’s going on.” And, he’s not too worried about future biosecurity threats anyway. “Doing good things with biology is hard enough. Doing bad things is even worse because you can’t ask for help -- and if you do ask for help, you’ve exposed yourself.”

The big opportunity everyone is missing

The final audience question of the night caused each of the panelists to pause in thought: “What is the big opportunity that everyone is missing?”Milsom broke the silence first, focusing on viral gene therapy. Sequences on plasmids are more harmful than scientists expected they would be, and in surprising ways, she said. With DNA synthesis, we can redesign everything from scratch to avoid some of these issues, explained Milsom. Hessel also pointed to viruses -- as well as nanoparticles -- as construction projects that people are missing. Kamdar, on the other hand, pointed to any application that can scale in “ways that matter,” such as oligo therapeutics.Mitchell, on the other hand, said that what we are missing is a real understanding and appreciation of the position we are in, where nature is now just a bunch of modules that we can mix and match, bending to our will. Carlson agreed.“The failure we’re experiencing is … it is hard to see where we are with exponential growth. We think linearly,” he said, and it’s hard for us to believe and fathom the trends. “In five years the world will look really different, and I struggle every day with what that’s gonna look like.”