How Aquaculture Innovation Can Save Seafood 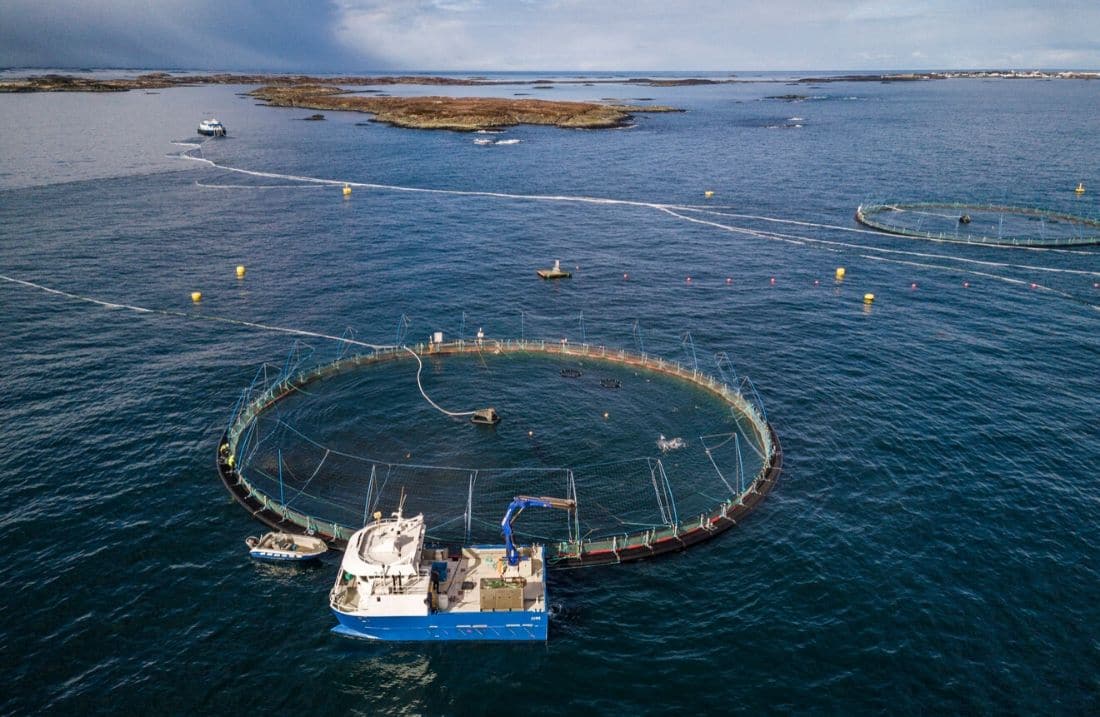 How Aquaculture Innovation Can Save Seafood

Oceans once teeming with life are being whittled away. Larger, predatory fish – salmon and tuna included – are now estimated to be at less than 10% of their pre-industrial levels. Historical data from coastal ecosystems has indicated that the loss of these large, predatory fish -- called “fishing down the food web” by an article in Scientific American -- can have severe consequences on the structure of these ecosystems. Aquatic predators high on the food chain keep prey populations in check. When they collapse, species lower on the food chain proliferate. Kelp forests, for example, are being threatened by a rise in herbivorous sea urchins. Kelp death en masse came after natural sea urchin predators, including sea otters, decreased in population.This disintegration of the ocean’s wildlife also corresponds with market demands for seafood, which have risen at an exponential rate since the early 1980s. When these larger, predatory fish are raised in aquaculture (fish farms) they are often fed “forage fish”, including sardines and anchovies. These forage fish are harvested from the oceans (to the tune of millions of tons per year), ground up, and used as feed for aquaculture, poultry, and other farm-raised animals. They provide an ideal source of nutrition and contain oils like EPA, DHA Omega-3, and ARA (arachidonic acid), an essential Omega-6.

A variety of fish-free ingredients used in aquafeed. Credit: F3 Challenge/Rick BarrowsThere are two significant problems with aquaculture in its current form: the demand for seafood is rapidly growing (well over 50% of the world’s seafood is now supplied from fish farms), while the global catch of forage fish has stagnated. Worse still, forage fish lie at the center of the ocean’s food chain. They sustain everything from seabirds to whales and dolphins, and their disappearance could have profound consequences for the oceanic ecosystem.We need to find new ways to produce fishmeal and fish oils – without the fish – to keep pace with global seafood demand and address the glaring shortcomings of modern aquaculture.

From space to the oceans

Netherlands-based Veramaris, a joint venture of DSM and Evonik, have tackled an important part of this problem. They use a strain of microalgae, originally discovered in the ocean, to produce the fish oils that salmon and tuna demand in a laboratory, without the need for forage fish. Veramaris’ origin is also a bit of a surprise and begins with scientists keen on exploring the solar system.“ began in the early 1980s as a project within the NASA organization,” says Øyvind Ihle, the Global Marketing & Communications Director at Veramaris. “ wanted to find a way to cultivate essential nutrients while in space for their missions. And with microalgae, you could just bring along sugar and water, basically, and produce compounds without any access to sunlight.”

Marine microalgae of the strain Schizochytrium sp. Photo courtesy of Veramaris.Though the NASA project was a success, the project lost funding and the amassed “library” of microalgae strains from the mission – 6,500 total – were spun off to a private company by the NASA scientists. The strains were eventually sold to DSM, a parent company of Veramaris.Once acquired by DSM, the microalgae were put to work. According to Ihle, “ has been working on this algal strain ever since the acquisition, and it has been used in commercial areas, predominantly in infant nutrition.”The current strain of microalgae, which has not been genetically modified, also produces EPA, DHA, and ARA. “That’s where Veramaris comes in,” says CEO Karim Kurmaly. “We have a strain and we’ve taken it to scale. It produces all three , so you can produce a marine oil without the fish.” Veramaris produces their microalgae oil at a commercial facility in Blair, Nebraska.

Changing the politics of eating fish

In October, Veramaris won the 2nd international competition organized by Future of Fish Feed (F3), a collaboration between NGOs, researchers and private companies to “accelerate the commercialization of innovative, alternative aquaculture feed ingredients to replace wild-caught fish”. The $200,000 prize was given to the competitor that sold the most “fish-free” oil with a fatty acid profile that mimics that of forage fish. Veramaris sold an impressive 770,000 kilograms, which were from their pilot batches.

Michael Tlusty, F3-Judge and Associate Professor at the University of Massachusetts (left), Karim Kurmaly CEO Veramaris (center), and Kevin Fitzsimmons, Chair and Judge of the F3 Fish Oil Challenge (right). Photo courtesy of Veramaris.Despite their success in the F3 competition, Kurmaly knows that a global shift towards sustainable aquaculture will not be possible without a parallel advancement in policy. Aquaculture certification bodies need to act quickly to decrease our reliance on an already fragile ocean ecosystem, and innovative technologies will not be enough.“We want to speak out to those certification bodies, and tell them that there are now alternative solutions to address our dependencies on finite natural resources,” says Kurmaly. If the rest of the aquaculture industry – fish farms, feed suppliers, and consumers – begin to harvest and purchase seafood that is raised on sustainable ingredients, we may be able to stave off an oceanic disaster.

Assuring the Future of Seafood

As aquafeed formulations are currently configured, the industry depends heavily on nutrients in fishmeal and fish oil to raise higher trophic, carnivorous species that rely on forage fish for sustenance (think cod, salmon, sturgeon, tuna, bass, perch, pompano, seabream, and eel) and also crustaceans (shrimp). But fishmeal and fish oil are also used to feed omnivorous and vegetarian species like tilapia and carp, because nutrients from these sources speeds growth and prevents disease. There are dozens of species raised in aquaculture, many of which demand unique nutritional formulations.If, all of the sudden, fishmeal and fish oil were to become unavailable, and fish-free formulations were not developed, then it might not be possible to aquaculture certain species. As a result, the F3 Team is concerned that feed companies that want to survive in the medium to long-term may also have an interest in finding substitute ingredients because, without forage fish substitutes, their product lines may shrink. Alternatively, feed companies that have fish-free formulations may have an advantage in the aquaculture market, which is estimated to be worth $71.7 billion by 2025.To spur this much-needed shift in aquaculture, F3 is working on initiatives that extend far beyond their competitions. They offer resources that make it easy for anyone – consumers, aquaculture experts and entrepreneurs – to learn about sustainable ingredients, test “fish-free” products, and grow their business. The F3 Feed Innovation Network, for example, provides in-depth information on suppliers of sustainable aquaculture ingredients and detailed formulas for aquaculture feeds that reduce or abolish the use of forage fish. This network is the real bread-and-butter of the F3 consortium, with the competitions serving as a “glossy banner” to attract the attention of seafood suppliers and consumers.To raise awareness about sustainable aquaculture, F3 judges choose competition topics based on academic studies. For example, a recent study in Nature Sustainability predicted that fisheries could reach maximum production capabilities in a mere seventeen years. The last competition, which ended in October 2019, sought to replace fish oil harvested from forage fish, an advancement that could extend this timeline dramatically.

Unfortunately, Veramaris’ success in producing aquaculture oils from microalgae only addresses part of the problem with aquaculture in its current form – there are many other hurdles that need to be overcome. Take crustaceans as an example; they consume a massive percentage of the total fish meal and fish oil used in aquaculture annually. According to F3, crustaceans (like shrimps) “consume roughly 31% of global fishmeal production,” while other carnivorous species, like salmonids, “consume around 23% of global fishmeal and 60% of global fish oil.”A “fish-free” feed formulated for Atlantic Salmon can’t be used to grow shrimp, either. Different species require varying levels of nutrients, which is why F3 emphasizes that multiple types of alternative ingredients will be needed to replace forage fish in aquaculture. For example, shrimp feeds demand 35% wheat flour, 20% soybean meal, and 25% fishmeal, among other components, according to the Food and Agriculture Organization of the United Nations. Any replacement for these feeds will also require an ideal balance of nutrient content in the form of proteins, omega-3s and other lipids. Synthetic biology may be able to formulate these blends more sustainably and at a lower cost.This year’s F3 Challenge - Carnivore Edition calls for teams to create and sell fish-free feeds for these carnivorous species using sustainable sources. Teams are tasked with selling aquaculture feed for one of three categories: salmonids, shrimps, or other carnivorous species, and the winner will be selected based on the most feed sold within each of these categories. Companies that want to enter the competition should visit the competition website to learn more and register.The F3 competitions have helped unleash dozens of innovative products, have saved millions of tons of forage fish from being harvested from the oceans, and are ensuring that a broad range of seafood remain available to consumers, buffered against the shifting winds of forage fish availability. But further progress – and the full adoption of sustainable ingredients for aquaculture – will demand intense collaboration across all levels of the “aquaculture chain”, from fisheries all the way down to individual consumers. Veramaris and F3 know this better than anyone.“Our primary role is as collaborators. We collaborate with feed mills, with farmers and retailers, and we engage with consumers through consumer research,” says Kurmaly. “This is how we effect change and de-risk the sustainability of aquaculture…It’s only through collaboration that we can remind the industry that everything we do on this planet is connected.”The F3 challenges are a great way to foster and build these collaborations; to meet other innovators, to devise and sell sustainable ingredients for aquaculture, and do global good for our fragile ocean ecosystems.